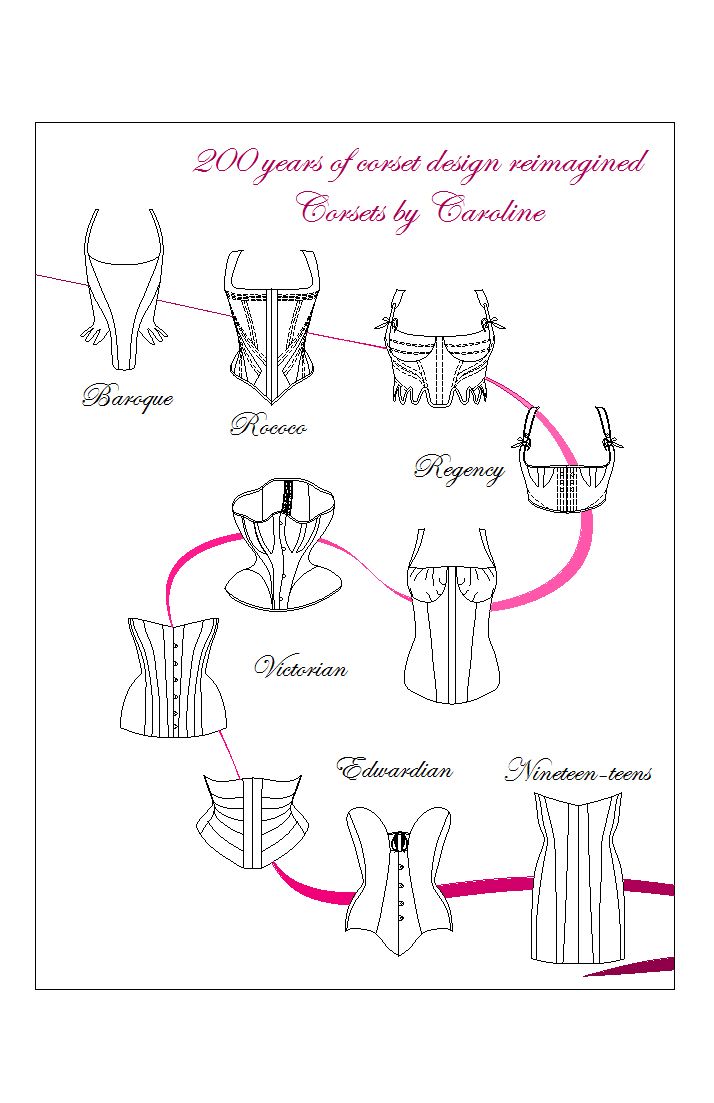 This is an extensive value-for-money pattern book (294 pages in total) with ten beautiful patterns to work through - inspiration has been taken from historical examples that have been reimagined for the 21st century maker. ALSO INCLUDES A 25 PAGE GENERAL CORSET CONSTRUCTION MANUAL.

For this collection I wanted to start with the earliest design I have patterned which are some stays from the early eighteenth century – the Baroque, and finish with one of my favourite patents – the Elizabeth Hume design from the first world war some 200 years later. I have added some historical text to give some background to the eras covered for the simple reason that history is interesting! It also gives some context to the designs – corsets were after all fundamentally about creating the correct underpinnings to shape and support the fashions of the time.

See photo for the measurements that these patterns cover.

Please take a look at my website https://www.corsetsbycaroline.co.uk/ where I also have a shop as well as lots of information about corset making.

About the author: Caroline Woollin is a designer specialising in corsetry. She has been developing exquisite and unusual patterns since 2014 has amassed more than 60 designs to her catalogue. Each design takes approximately one month to complete and involves painstaking experimentation into grainline and panel angles to arrive at the most wrinkle-free garment possible. Inspiration is from a variety of sources – original historical patterns play a part but often she just mashes shapes together in CAD to come up with new and exciting designs; triangular panels ending at points, corsets made entirely of gussets, gores in unusual juxtapositions, tiered hip fins with pockets. She is not afraid of trying completely new ways of doing things and frequently writes articles about her findings for platforms such as Foundations Revealed.

Why buy this book? Corsets were historically worn to create the fashionable silhouette of the day, to give bust support, and to hold up the weight of skirts (or stockings in the 20th century). Not all Victorians were tight-laced to the point of discomfort - maids wore corsets and went about their duties without hindrance. In the 1920’s however, a straight boyish silhouette contributed to the corset falling out of fashion, as did the later invention of the brassiere, although girdles were common until the 1970’s. These days everything goes – cosplaying and burlesque have all contributed to an increase in the interest in corsetry, and from reading the many forums on the subject, bust support and back problems are also cited as being the driver in the quest to learn. Some people just love the feeling of being hugged (the corset ‘hug’) – slight pressures in certain places can alleviate pain. An off-the-rack corset will never provide a perfect fit that will help with a persons’ idiosyncratic requirements. Moreover, different designs give different levels of comfort and for those new to wearing a corset, they may need some time to find their ultimate fit and become accustomed to it. Often, a number of different styles will need to be tried to arrive at a design that works – most people don’t have the budget to recruit a corset maker to do this for them, and learning themselves is the most economic option - trying lots of different designs is the best way to find the most comfortable fit and shape for your body.